The Jack Johnson concert AFSA/All At Once partnership 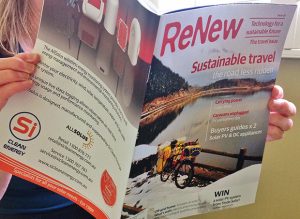 The Australian Food Sovereignty Alliance’s (AFSA) Peoples’ Food Plan has received coverage in the January-March 2014 edition of ReNew magazine, the long-running publication of the Alternative Technology Association (ATA). See page 10. The issue focuses on sustainable travel and is sure to have appeal to the nomads among us.

The ATA  perhaps Australia’s long-running technology enthusiast-based organisation of its type and for some time now has been an advocate for renewable energy technologies.

ReNew, their quarterly journal, was once called Intermediate Technology after EF Schumacher’s (credited with inventing the concept) name for what we now call ‘appropriate technology’. It changed its name after the computer industry co-opted ‘IT’ to describe its own technologies. The magazine carries authoritative reports, assessments and research into renewables.

The significance in ReNew’s half column report of the AFSA’s food plan lies in its appearance in a magazine that is focused on technology and suggests that the editor sees sustainability in its broader context of which food is a part.