The Jack Johnson concert AFSA/All At Once partnership

Shopping with Catriona — in the rain 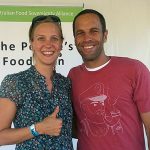 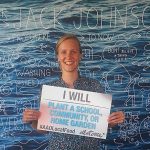 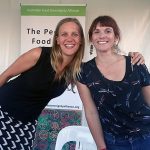 Fiona Berry and Claire Parfitt looking after the AFSA stall 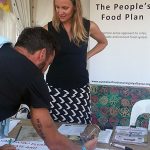 Hmmm… wonder how many Snow Pea seeds are in the bottle? 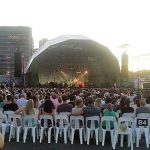 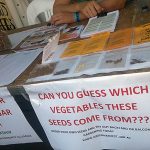 Do you know your vegetable seeds? 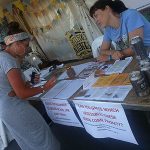 AFSA’s puts people to the test
…do you know your vegetable seeds? …guess the number of seeds in the jar 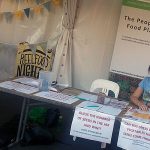 Tuesday night was myself and Lieszel on the stand.  The All at Once staff were very helpful and set us up (in the shade luckily) and gates opened early.  Jack Johnson even dropped by the stand to say hi 😉  The green concert initiatives included a water refilling station and a competition to win a signed ukulele if fans could collect stamps for visiting a local non-profit stand, filling up their water bottle, carpooling to the show, recycling and purchasing CO2 offsets.  There was even organic waste separation alongside recycling and general waste.

We had lots of people dropping by the stand asking what the people’s food plan was.  The ‘guess the number of seeds in the jar‘ game was very popular, as was the ‘do you know your vegetable seeds?‘ game.  The crowd was quite international with a lot of students studying in Australia or families in Australia for work for a year or two.  There were some good conversations about what local food systems are and why they are important in Australia.  Very few controversial conversations really, many people were already avid farmers market shoppers and agreed that our food systems should support local and sustainable farming.  Some other not-for-profits there were the Surfrider foundation (supporting plastic-free oceans) and Youth Food Movement (who were next door to us and also had lots of people interested….particularly in their free popcorn).

Wednesday night was myself and Claire – it was a bit busier than the first which was great.  Many conversations with people who were passionate about the issue of food sovereignty – one corn farmer who was organising a crop and swap in his local community (he said he does this to balance out his day job :-), a couple of young people from Bankstown who learned for the first time what a farmers market is and one woman had just finished studying her masters in Food Science.

Sadly, it was difficult to actually get membership at the stall. People didn’t seem keen to commit to becoming a member – and the perks were a little difficult to sell (perhaps other benefits that relate to eating and food might attract more members).  The woman who was studying Food Science joined as a student member but that was the only sign up.  We did, however, receive $80 in donations and 2.5 pages of signup email addresses we can add to the e-newsletter list so that is not too bad really.

Two people actually tied to win the seed guessing competition (snow pea seeds).  They guessed 640 seeds and there were 642!

Otherwise a useful event to have a presence at.

I’d say next time it would be good to have the fair food documentary trailer playing and perhaps some more greenery like a green wall or vege seedlings so people can look and touch an edible garden…there were definitely a few avid backyard gardeners though who were able to guess the more difficult seeds (e.g. brussel sprouts!).

The slideshow above are some pics of the evening.