Underground Restaurants: Another way to change our food system…

What is an Underground Restaurant?

What is an underground restaurant? It is an alternative dining experience which has been happening internationally since the late 1990s. By 2006, underground restaurants were covered in the Wall Street Journal, CNN, and the San Francisco Chronicle. In 2008, the New York Times printed “The Anti-Restaurants” and Jen Garbee published Secret Suppers. In 2009 CNN Budget Travel gushed “you may never go back to eating out the old-school way again.”

Jeremy Townsend, culinary renegade and co-founder of the Ghetto Gourmet, says, “We are… attempting to make dinner more of an interaction, rather than a transaction.” His website has gathered nearly 9,000 members globally since 2004, more than 3000 of whom identify themselves as willing chefs or hosts.

Kerstin Rodgers, author of Supper Club (2011), argues that home restaurants are a form of DIY entrepreneurship for untrained, undercapitalized, or late-blooming chefs. In 2009, she began running a restaurant for 30 in her living room, contributing go a growing movement across the UK. She likes to serve dishes that restaurants “don’t have the time or business model to make.” She also maintains a directory of underground restaurants, Supperclubfangroup. 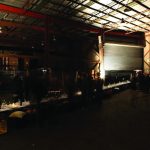 ‘Pop-up’ restaurants are a derivative of the underground restaurant movements. Chefs may start a temporary or part-time restaurant to build a following or attract investment for a new project.  Others may choose to cook in a more intimate and less capitalized and commercial setting. Each project will have a different emphasis and experience: The Hebberoy’s Family Supper focused on the idea of a communal table. David Santos’ Uni dinners in New York City have a culinary focus. Some restos create dinner as a form of participatory performance art or as a collaboration between chefs and artist. Studiofeast is focused  on “getting people to cook”.

Here in Sydney, Full Circle has been holding “feasts” in Sydney since 2009…”food events, big, festive, secret dinners in unique, urban locations, factories, warehouses and farms. Full Circle is about the whole cycle. It’s about supporting food in all its many phases and using this knowledge to source and serve the most pure produce. It’s about awareness and understanding the journey your food takes to get to your plate. It’s about supporting the little guys, the passionate local producers…”  Full Circle has just opened their most recent project, Alfio’s, a regular, but temporary, weekends-only restaurant. www.alfios.com.au  (Review: When I dined at their previous incarnation, The Eat-In, in 2013, the parties didn’t talk to one another despite being seated at a communal table and no attention was drawn to provenance or producers.)

My underground restaurant, The Viand, began in Venice CA in 2005, I ran it monthly for two years there and intermittently afterward in a few other cities. According to a PhD student who interviewed me recently as part of an international study of underground restaurants, The Viand was unusual in that our agenda was primarily educational. Our goal is to convince our diners to invest more of their food budget in direct purchases from farmers and artisan producers. To achieve this, we expose them to high quality ingredients and demonstrate very simple cooking in an open kitchen where guests can hang out and ask questions.

Last year I wrote a book about our experience, and about how projects like underground restaurants have created culture to support new economies, like local food which is now a $5B industry in the US alone. The book also goes beyond the world of food to imagine how we can transform further sections of our economy.

Since the book, I’ve continued conversations with artisans about why they do what they do, and why people buy from them. There’s one very simple point that every artisan makes. The story matters. An industrial food system has deprived us of knowledge about what’s in our food and where it comes from. A globalized commodity system has obscured the ecological and social conditions of production.

Industrial and globalized systems treat food as a commodity. Increasingly people want to consume food and other goods in the context of community. Stories begin the process of de-commodifying food and goods and returning them to a social context of production and consumption.

Artisan production is the antithesis of these overwhelming and irresponsible systems. It’s intimate, transparent, and accountable. And artisans report that people now want the story that connects them to the places and people who make what they consume.

At The Viand, every one of the 10 courses has a story, and many have a ritual or experiential dimension designed to connect diners with producers, with their own food stories, and with cooking.

I’ll be running the second Sydney Viand on 26 October. There are a few (very few) tickets left. If any remain by the time this article is published, you can get them at

Underground restaurants are an example of what economists call “economic institutions”. They are new forms of exchange, which become structured, recognizable, and repeated. The economy is nothing more than how we decide to make exchanges to meet our needs and pleasures. It’s ours, and we can create and choose how we do it. Farmers and allies all over the world are innovating new economic relationships that are better for farms, farmers, and foodies. Existing institutions can be used as models for new iterations to manifest our values in the economy. And the new relationships are delicious!

If you want to start an underground restaurant, there are step-by-step instructions in Amory’s book, available here: https://viand.net/blog/underground-restaurant-ebook/
Caption for eatin.jpg should be “Full Circle Community”.