Underground Restaurants: Another way to change our food system...

What is shopping Beyond the Trolley? A consumer’s role in changing the food system. 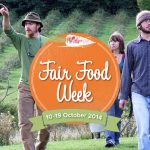 From October 10-19 this year, thousands of Australians all over the country will be celebrating the second Fair Food Week.

Coordinated by the Australian Food Sovereignty Alliance (AFSA), these days are dedicated to celebrating the work of women and men in country and towns who are striving to create a fairer food system for their families and communities.

Fair Food Week is also about raising awareness amongst the broader public on the many critical issues our food and farming system is facing, and what we can do to tackle those issues.

The now defunct National Food Plan created for the first time a $1.5 mn fund to support community food projects, like community gardens, farmers markets and community kitchens. 364 groups applied to this fund, but it was axed in February this year by the new Federal government. AFSA is encouraging communities to raise funds for local food projects.

Having witnessed a small part of the dynamic global movement for urban agriculture over the past couple of months during my Churchill Fellowship, I am especially keen to see this movement flourish in Australia. I have spent time with local governments in Chicago, Milwaukee, Toronto, Rosario and Neuquen, and can see what a key role supportive policy frameworks – and resourcing – plays in the expansion of urban agriculture. So this is a great focus for Fair Food Week.

I was delighted to see that that Lock the Gate Alliance, which unites farmers and rural communities with urban environmentalists, is now a major sponsor of Fair Food Week 2014. As many in the Coffs Coast and Northern Rivers regions of NSW know all too well, the rush for unconventional mining – fracking – poses serious environmental and social risks that are yet to be properly evaluated.

Which is more important – a new mining boom that may last a few years and enrich a handful of mining executives even further, or safeguarding our best farmland for food security for future  generations?As in 2013, the inaugural year of Fair Food Week, there is a wide diversity of events already scheduled. These include visits to farms and community gardens, long table dinners on farms, farm and garden workshops, Fair Food forums, community cooking events, local business open days, celebrations of ethnic and regional food cultures, permabliztes, soup kitchens and more.

One event I am especially pleased to see is the Food Security Conference in Sydney, to be held on October 13-14. Organised by the newly-formed Right to Food Alliance, whose members include the Sydney Food Fairness Alliance, Foodbank NSW, Red Cross, SecondBite, Blacktown City Council, NSW Department of Health (South Western Sydney District), Liverpool City Council and others, the centrepiece of this conference is the presentation by Joel Berg, Executive Director of the New York Coalition Against Hunger. Joel will be in Australia for a series of events during October. His focus is to raise awarness of the structural reasons why hunger persists in affluent countries like Australia and the United States, and why it is unacceptable to continue tolerating this reality.