AFSA President, Michael Croft, recently participated in a debate at the St James Ethics Centre on the topic, Should foreign investment in agricultural land and infrastructure in Australia be strictly limited? Michael took the affirmative position. Michael Croft and Nick Rose wrote an opinion piece on the topic of the debate… 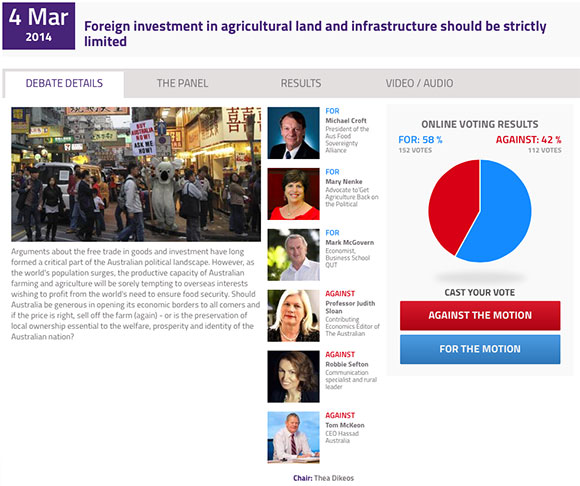 Late last year Indonesia’s biggest importer of live cattle, Santori, purchased two Northern Territory cattle stations covering some 5,500 square kilometres.  One of those properties belonged to a family friend. As I write, Indonesian corporations are looking for more farmland, enough to produce 100,000 head of cattle a year.  This means foreign companies, some with links to the government, and typically financed by both public and private international financial institutions (e.g. sovereign wealth funds, pension funds, hedge funds), are intending to purchase some 30,000 square kilometres of Northern Australia.  To put this into perspective, 30,000 square kilometres is roughly the size of Taiwan or Belgium: a larger landmass than 107 of the world’s 192 nations.

These sorts of ‘investments’ are part of an accelerating global trend. It is not just about Australia and Indonesia, or Australia and China. Transnational agribusinesses and financial institutions are acquiring stakes in agricultural land and infrastructure in land-rich countries around the world. Pension funds from the US, Canada and the Netherlands are behind many large deals in recent years. “Basically, the world is our farm,” says Netherland’s National Pension Fund APG’s Jos Lemmens. It “just depends on the project and whether the risk/return profile is right.”

This is the wider context in which this debate must be placed. There is a ‘global landgrab’ underway, of which Australian farmland – and infrastructure – is a target; and in which Australian companies and financial institutions are participants. The questions we need to be asking are: why is this happening, who is benefiting, and what are the impacts on the citizens of the targeted countries?

In terms of the first question, there are calls that Australia ‘needs’ foreign capital investment in agriculture and infrastructure so that we can become more ‘efficient’ and ‘productive’ and therefore play our part in ‘feeding the world’, or more particularly, the Asian middle class.  As regards the supposed need for foreign capital, this may have been true one hundred years ago, but lacks legitimacy now that we are recognised, by any measure, as one of the richest nations on earth.

More fundamentally, the global landgrab is not about ‘feeding the world’. It’s about feeding corporate and financial hunger: the need for capital accumulation and profit. Most of the acquisitions are either speculative or to produce non-food commodities such as biofuels and timber. Let’s at least be honest about that and stop telling ourselves porkies.

In our attitude to big capital (foreign and domestic), Australia has become like a kitten that constantly rolls over to have its tummy tickled. Under current laws and regulations foreign companies and individuals have the right to buy Australian agricultural land, with minimal scrutiny.  A foreign corporation or individual can spend up to $248 million without question – or $1,078 mn if the acquisition is from the US or New Zealand – which would buy just about any agricultural holding in Australia. The irony is that every one of our major trading partners has strict limits and restrictions on investing in agricultural land and infrastructure.

And as for who benefits, it’s the owners and shareholders of the corporations and institutions in question, not local producers or communities. Profits are repatriated, and the ready deployment of transfer pricing and other legal and accounting techniques means that tax paid in Australia is minimised.

Meanwhile, we lose control of our vital land and infrastructure. And because most of the crops for export are unbelievably thirsty, we are also effectively giving away vast quantities of our precious fresh water as well.

Where is the reciprocity, the mutually beneficial trade?  There is the cash transfer of the initial sale, but where is the much-touted technology or skills transfer that supposedly comes with foreign investment in agriculture?  It’s actually going the other way: Australia is one the most skilled and technologically sophisticated agricultural nations, so the skills and technology transfers are usually from Australia to other nations.

We don’t even value-add the raw commodities and products here, which would at least create some jobs and stem some of the bleeding in our dwindling manufacturing base. The live cattle trade is a case in point: it’s a classic vertically integrated supply chain designed to benefit those in charge of it.

As for infrastructure, since it’s already in place, all we are doing is ceding control, our sovereignty. Where are the investments in social capital?  A family farm is sold and a few lucky people are kept on as employees or contractors, but once the skills transfer has occurred will even the locals have jobs?  Experience shows that globalisation is a race to the bottom in terms of wages (but not profits for agri-food oligopolies), so social capital is diminished too.

As currently proposed and within the existing regulatory framework and ‘expand at all costs’ economic paradigm, foreign investment in agricultural land and infrastructure works against Australia’s national and best interests. Transnational capital has no allegiance to Australia, and because we have told ourselves that ‘the market knows best’ we will let it do more or less as it pleases.

There is an alternative – there is always an alternative. Why aren’t we selling the food and not the farm? Why don’t we prioritise the well-being of our communities, and the integrity of our soils and waterways, above the profit interests of transnational capital? History and experience shows that the latter almost always comes at the expense of the former. These are the questions we have to be asking ourselves, as a matter of urgency.