STOP the sale of GM Golden Rice in Australia

You could see our diversity in the hodge podge, mismatched layers of clothing worn to protect us from the record-setting temperatures that never climbed above -8C, and later in our dorm rooms at night as the layers came off, leaving us as we were, stripped back to basics and a dozen tongues.

We gathered from 10 countries, with more than 10 languages, in the frozen heart of Seoul to share experiences, to globalize the struggle and to globalize hope, and while some of what we heard and saw caused collective despair, our solidarity rang of hopefulness and joy. 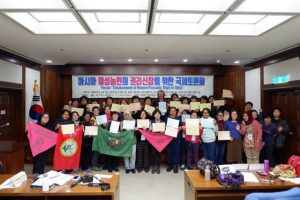 We farm, we cook, and we feed the world. We are peasant women farmers** of Asia Pacific.

This meeting was the second women’s workshop of La Via Campesina (LVC) in Southeast and East Asia*. We gathered in recognition of the struggles women particularly face as peasants – women are overwhelmingly the victims of domestic and institutional violence, have shamefully low rates of land ownership—in spite of constituting more than 50% of the farmers in the region—and earn as little as half what our male counterparts earn. Women bear the burden of the vast majority of domestic labour, in addition to our labour on farms and in other forms of employment.

In solidarity with the women who shared their stories, some will not be named here, as they are targets of military governments.

We heard that in Thailand, whole villages have been displaced by the current military government. One village is trying to re-group so that they might go back to producing food collectively as they used to do, and where food is produced collectively, all profits go towards their shared struggle. When the military confronts them, their strategy is to put the women in front, as it reduces the incidence and levels of violence. Women are therefore the first to be injured, but fewer are hurt if women lead the way.

We listened as our Filipino sister told us that their current President openly endorses rape as a tool of war, telling Filipino soldiers he would back them up if they raped women while enforcing martial law.

Every woman present had stories of unfair division of domestic labour – it was probably our biggest commonality – and it is so endemic that the Korean Women Peasants Association (KWPA – our wonderful hosts for the week) have been lobbying for free school lunches to support female farmers who struggle to find time to make lunch for their children.

The 60-year-old farmer from Taiwan Huang Hsiang told us that while she loves her mother dearly, she doesn’t want to be like her because she would rise at 3am every day to cook and feed chickens and cows, before going out to work in the fields with her husband, who woke at 5am after the domestic chores were done. Hsiang has done incredible work against land grabbing with the Taiwan Rural Front, and her own son now rises early to sweep the floor and feed the baby.

In addition to our struggles as women farmers, we heard many organisations share that women are leading the way in saving seeds and preserving genetic diversity in agriculture across our region. And they are collectivizing and working together for change – not only for feminist reform, but also for food sovereignty and particularly agroecology.

On the third and final day of our meeting we trundled three hours southwards on a bus to visit Sisters Garden – a women farmers’ producer cooperative that’s been operating for nearly a decade. As we feasted on the regional specialty of dried persimmons, we listened to the story of how they came together to grow food that is clean, safe and good to sell directly to people in the cities. They coordinate their growing as best they can to maximize diversity in their boxes (a seasonal box for a family of four is USD$100/month), and make a range of ready-to-eat dishes for inclusion in the boxes, such as tofu, kimchi, dried persimmon and sticky rice cakes. A commission is taken from each farmer based on their profits to pay one staff member, and for maintenance and upgrades.

Once a week they gather at the processing and packing facility built with government support, and enjoy a communal lunch while planning next week’s boxes for 140 households. They also provide donation boxes for organisations such as those providing support for victims of sexual violence. The deep camaraderie and sheer joyfulness of the 13 female farmer members was palpable, strongly affirming the benefits of working as a community towards a common and noble goal.

On our field trip we also visited a community that is both devastated and galvanized by the US military’s presence established through the Terminal High Altitude Area Defence (THAAD) anti-missile system. The elders of Seongju have been leading the fight against the military installation for these past two years, rising early to form a human blockade by 6am every day – even in temperatures as low as the -20C we experienced during our visit. The military police have intervened on multiple occasions, leading to injuries that included smashing one woman in her eighties’ teeth to the extent that she chose to keep her face mask on during our visit. 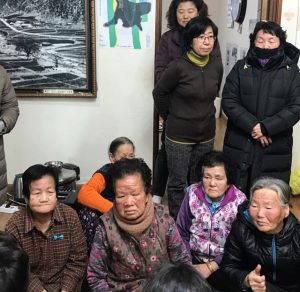 Most of the women we met are in their eighties – tiny, hunched, but fierce and committed women – who told us that ‘it doesn’t matter much for us, but what about our sons and daughters?’ These women have lived through the horrors of war, deaths of loved ones and abuse as ‘comfort women’, and they are certain that THAAD can only bring more war to their peaceful village. THAAD is ostensibly being built to protect South Korea and US interests from North Korea, but the villagers say it’s really to give the US another facility close to China and Russia as they gain power in the new world order.

There wasn’t a dry eye in the room as these brave women told us their stories and thanked us for bearing witness to their struggle, asking that we return home and share it with our countries.

While we are doing that, we are also thinking about how better to engage the elders of our own communities in our struggles – these powerhouses of experience and demonstrated will – something to work on in 2018.

Our Action Plan included a few very concrete items, such as a media release to promote and support the villagers fighting against THAAD, and a social media campaign to highlight and promote the work of women farmers on International Women’s Day on 8 March. We also spoke of the need for our organisations to do more to train women in food processing and better control of value chains – something we’ve taken seriously here at Jonai Farms for some years now with my regular training of female butchers and #meatgrrlsmonday. Another focus is to keep stepping up our work around agroecology, and acknowledge and support women’s efforts to save seeds, while promoting this work as essential for a food sovereign and delicious future.

For me personally, the week in South Korea with these remarkable women was a powerful motivator to do more to support the work of women farmers – explicitly and joyfully. And to speak out more against the ills of patriarchy’s contributions to capitalism and the subjugation of women in all walks of life.

United we stand, divided we fall. Or as Zainal reminded us, ‘unorganised good people will be marginalized by organized bad people.’

We farm, we cook, and we feed the world. We are peasant women farmers and we build the movement to change the world!

* Fair Food Farmers United is attached to this region until LVC sorts out our region now that we’ve joined the global movement of peasant farmers.

** The term ‘peasants’ has very different meanings around the world, but is the preferred label of smallholder farmers in the food sovereignty movement. I use the term respectfully here in a politics of solidarity – not appropriation – as advised by my comrades across the global south. I’ll write more on this in future.