Join us in Canberra for the 2017 Food Sovereignty Convergence! 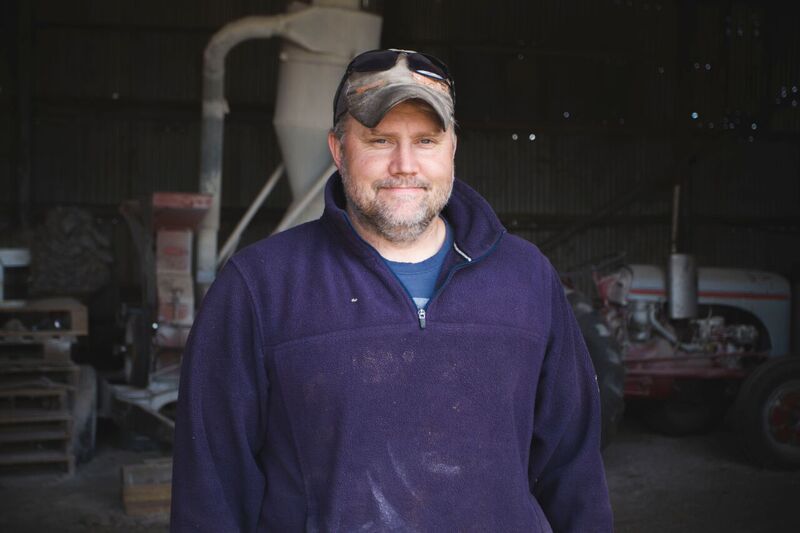 Where and what do you farm?

We’re from South Australia, and have two small properties. One is the few acres on which we live, which is at Templers, just north of Gawler.  The other is our larger, but still not large, production place out at Lochiel.

We farm pigs, sheep, and cattle.  We breed the pigs and sheep, but buy cattle in and feed them on.  The cattle are agisted elsewhere as we don’t have the room for them.  Our primary focus is the pigs, and we are fully set up to breed and grow them.

How is food sovereignty important to you?

Food sovereignty speaks to one of our most basic human rights and need – the ability to grow food in a way that benefits us and our land, and the right to choose how we do that.

Right now we are at the mercy of corporations whose entire focus is profit.  They care nothing for the consumers or the land, and certainly nothing for the animals they grow.  Land and stock are commodities, consumers have dictated to them what their produce should look/taste/feel like and what it should cost, and farmers are forced into sometimes abhorrent practices to make money.

To me, food sovereignty is taking back control of what we eat, how it’s produced, how those poor animals are treated, and our ecological future. 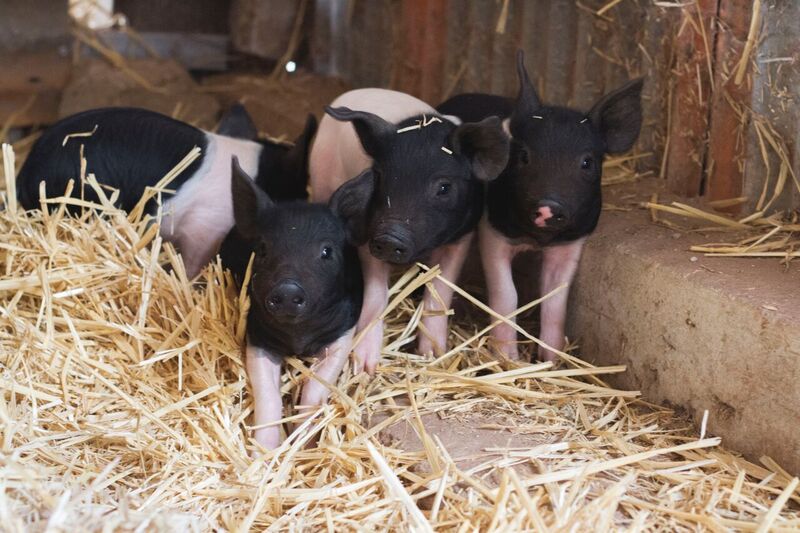 What are the main issues that concern you as a farmer?

Our focus is the ethical breeding and growing of stock animals, particularly pigs, but also sheep and cows.  The main issues that concern me around those things are:

Another aspect of sustainability is the carbon footprint and food miles on some of the processed food.  We’ve had nutritionists suggest that we include fish meal from South America!  Even meat meal is problematic as it is highly processed and therefore has a large carbon footprint.  We combat this by milling our own feed, sourcing it all locally, and keeping the diet entirely natural.

Don’t even get me started on GMO…

How and why did you get into farming?

Several years ago we had a place in the suburbs and our 600 square metre block was at critical mass for fruit trees, veggies, chooks, and ducks.  We wanted to move to the country and aim for self-sufficiency.

When you’re faced with the choice of either eating ethically or becoming a vegetarian, both of which have their roots in pretty much the same ethical dilemma, then you either find a trusted source or you do it yourself.  We chose to do it ourselves.

We had 2 litters of pigs inside of around 15 months, and quickly found out that even one litter is too much for one family.  We reached out to like-minded friends with the aim of not only being self-sufficient but also becomming cost neutral.  The meat was snapped up, and we discovered that we could probably do this on a larger scale with the aim being making a living from what we love.

How do you market your produce?

We sell in bulk over the internet and via a couple of markets.  Our marketing is entirely via social media, which has worked very well for us.  We have a Facebook page and Instagram, and make sure we’re active and responsive.  We have a blog as well, the aim being to give people assurance around our practices as they can go and read about exactly how we do things.

More than that though, we try to genuinely engage with people.  We give flyers out at the markets that contain a blurb on us and all of our social media information.  We talk to people about the animals, not just the product, and have found SO many that actually care.  They care about how the animal lives, what it eats, how they’re bred, how they’re transported.  They appreciate that we can answer all of those questions with authority, as we control the entire supply chain, and those engagements last.  We build relationships with people, rather than just facilitate transactions. 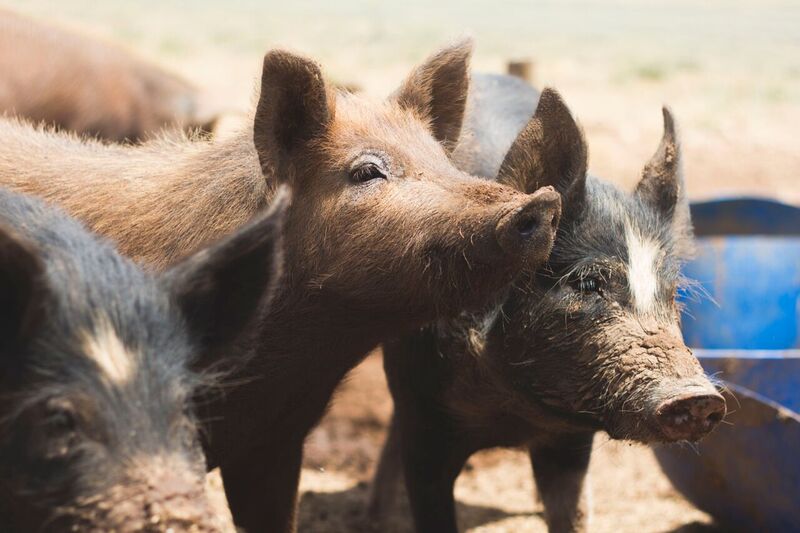 How do you care for the land you farm on?

We have a rotational system for our paddocks, where we plow and plant to absorb the excess nitrogen left by the animals. We’re experimenting with what we plant, and are looking at brassicas.  That’s as much for the stock as it is for the land though.

We use a rotational cropping system, but are limited to exactly how that works as we need to use a share farmer.  We’re looking at changing that over the next few years.

What’s the context of the land you farm on? Are you surrounded by a supportive community?

We’re surrounded entirely by broad-acre farmers.  We’ve managed to garner some good support though, even from local intensive piggeries.  We even had a small local piggery contact us a year or so ago to offer to sell us some Large Black pigs.  They’d experimented with them, found that the breed doesn’t work in an intensive context (“the fattiest pig we’ve ever seen”), and so called us to see if we’d want them.  They understand what we do and we’ve explained why we do it.  They may not share the entire ethos, but they at least respect it.

We’ve also connected with some people who do what we do, but on a much smaller scale.  For the most part they’ve found us and have come to get tips and pointers.  It’s still a nice little network that we enjoy being part of.

What do you see as the biggest issues in our food system? And what do you think is required to change this?

The need to adhere to unethical practices in order to make money.  I’ve had long conversations with a local intensive piggery, and I know the owner genuinely cares for his pigs and is actively trying to change his practices. However, his is a low margin/high volume business, and he needs to guarantee maximum productivity in order to survive.  He has no control over the pricing of his product – it all goes to one company (I won’t name them), they slaughter the animals, and then tell him what they’ll pay.  If there’s 7mm of back fat rather than exactly 6mm, then they’ll dock the price.  How does that make sense!?

We need to break the back of our dependence on big corporations to produce our food, thereby removing ourselves from their revenue calculations, and then we’ll be able to affect real change.  Until then, farmers will focus more on their outcomes (e.g. output volumes) and less on their methods.

How do you think farmers could be better supported?

Farmers right now aren’t free to change or be innovative.  They need to toe the line and do whatever gets them the largest volume.  This leads to giant intensive pig farms and millions of acres of mono-culture.  It also leads to a dependence on herbicides and more and more GMO.

Farmers have relatively few markets for their goods, and those are controlled by the big players, like our supermarket duopoly.  That means they can’t set their own prices, but rather have prices dictated to them.

I’m not sure how to fix any of that.  Encouraging innovation and removing the dependence on herbicides and GMO is easy to say, but there are giant corporations spending millions on lobbying to make sure none of that happens.  How do we change that?  We act locally, buy direct from the farmer, get involved in not just their outcomes but their methods, we ask questions, we suggest changes, we stop buying fruit/veggies/meat/eggs from the supermarket.

Do you have any plans or goals for the future on your farm?

Yes. We plan on probably doubling our production and expanding our market.  We want to build our own boning room so we can be our own butchers.  We also plan on expanding to be able to plant our own crops.  We only have a little over 50 acres on which to do that, but the equipment for even that much isn’t cheap.  We’re getting there though…

What do you love about farming?

The animals and spreading their message to people.

What is most challenging about farming?

Right now I work fulltime in order to support us.  The farm pays for itself, but isn’t yet at a point where it can sustain us.  That means that I work 7 days a week, and that can be wearing.  It’s rewarding too, but there’s only so much a body can do.  We proactively try and combat that by doing things like forced post-market Sunday afternoons off.  That means that my entire weekly relaxation is compressed into several hours on Sunday afternoon/evening, but it really does help.

What does a fair food system look like to you?

People not only knowing where their food comes from, but knowing how it was produced and being active participants in what that looks like.  People either growing their own food or having a relationship with the person who grew it.  Not picking up a packet of meat in a supermarket that was unpacked by one of their “butchers” that came out of a box that came from a billion dollar corporation, where no one can talk to the provenance of the animal.

When people ask me how our animals are bred, what they eat, how they’re transported, our stocking rates, how they’re housed etc., I can look them in the eye and answer their questions with authority because I am the one who does it (“I” in that context also includes my family of course).  We know our animals, we know their personalities, we know what makes them happy, because we about work ourselves to death giving them the best lives we possibly can.  People who buy from us aren’t just paying for a superior product, they’re also paying for the provenance of the animal and the assurance that it led the best possible life.  That’s what a fair food system is.

http://www.theathertonfarms.com/
If you’re a farmer member of AFSA and would like to share your story, fill out the interview here and email your responses to admin@afsa.org.au.
Published On: 18 August, 2017Categories: Fair Food Farmers United, Farmer profiles, GMO