Both inspiring and instructive: Vandana Shiva in Sydney

A new apple future for Tasmania - any hope?

I ATTENDED two of global food sovereignty advocate, Vandana Shiva’s appearances in Sydney this February. It was the second event that I found most interesting, but more on that later.

To walk past the display tables at Vandana’s Friday evening presentation at the NSW Teachers’ Federation hall was to pass by some familiar faces. There was Alana Mann from Sydney University and Fiona Campbell who does IT and communications support for the Australian Food Sovereignty Alliance below the organisation’s banner. There was Nick Ritar from Milkwood Permaculture at their table. And there were other tables with faces I did not know, mainly those of the anti-GMO lobbies. And, as is usual at such events, there was a plethora of familiar faces in the milling audience before and after the event itself.

Vandana’s presentation followed that of innovative US farmer, Joel Salatin. I’ve seen Joel before and he didn’t add much that was new—he was the supporting act, after all—other than to say that his neighbouring farmers didn’t much like his approach to agriculture. Milkwood had scheduled Joel for a weekend of specialised courses in farming.

What Vandana said would be familiar to those who have heard her messages before, on the importance of maintaining the food sovereignty of smaller and medium scale farmers worldwide, of maintaining the supply of traditional, non-hybridised agricultural seed through seed saving and distribution and of the danger of corporate control of our food systems. I was happy that she addressed recent allegations by a US-based pro-GM advocate that she received US$40,000 per appearance and travelled first class, among other alleged misdeeds that read more like an attempted character assassination. She ridiculed the dollar sum without disclosing what it is that she actually receives for her appearances.

The US advocate also alleged that Vandana misrepresented her scientific qualifications and that they were in social sciences. She repeated what has been widely reported before, that she was trained as a physicist specialising in quantum mechanics.

Vandana started the Navdanya movement, a seed and farming education organisation. She is a middle aged woman who wears her dark hair tied back in a bun and dresses in traditional Indian clothing. She wears the traditional Hindu tilaka on her forehead. Her reputation and work brings her what I can best describe as a commanding presence (cliched I know that term is, but it does describe the perception of intellectual authority that she emanates). This is reinforced by a paced delivery, neither too fast or too slow, her voice adopting a suitably deepish tone.

The impression that comes across is that Vandana is delivering a serious message. She uses emphasis but does not indulge in the name-calling, blatant condemnation and emotional rhetoric that so mars many the messages of anti-GMO advocates. Vandada does not pull punches when it comes to the machinations of global corporations and their seeking control over our food systems, but she does so in a measured way that affords greater credibility to what she says. You get the impression that Vandana calls upon the objective, analytical part of her brain in delivering her messages, rather than the emotional.

The secondary benefit of events like this is networking, catching up with friends and colleagues, and there was plenty of that, the organisers wisely having built the opportunity into their program.

Vandana’s Friday night appearance would have been empowering for those who filled the hall—it was standing room only at the back. Hearing what may be now-familiar messages again is a reinforcing thing that keeps them alive in individuals and the organisations they participate in.

People might call this preaching to the converted. But that mistakes how social change works. That preaching is actually a reinforcing of message and motivation for those already involved. It is best seen as educating-the-educators and change makers who go on to enact those ideas in the world and influence others.

Saturday morning was one of those humid, sticky, late-summer days in Sydney and it was the morning of the invitation-only meeting that I found the most interesting of the two Vandana Shiva events I attended.

It took place in the Surry Hills Community Centre in the City of Sydney’s newish library building on Crown Street. It was a conversation with people who play some role in the fair food and food sovereignty movements.

How to structure a movement?

There’s a tendency even among organisations that would think of themselves as socially progressive to adopt old and conservative models of organisational structure and operation.

With this in mind I explained to Vandana that there are numerous small organisations focused on fair food but they often act independently and are scattered. I suggested this reduces the overall effectiveness of the fair food movement and asked her for any insights she has developed as to structuring the fair food movement in Australia.

I should have anticipated that her answer would be based on the model of the agricultural biodiversity she promotes and on a pattern in nature. First, though, she started with a critique of the conventional, old and tired organisational and movement model we are all familiar with.

“The pyramidal model of organisation is finished. The top forgets that the bottom supports it”, she said.

“The model for movements is biodiversity. It is like overlapping circles of organisations that are independent but that cooperate in working together.”

Sitting in the armchair in front of the 50 or so in the community centre, Vandana expanded further on this by drawing an analogy with multicellular organisms.

In life, she said, “There is no master cell. Life happens through self-organisation”.

Here was Vandana the scientist speaking, drawing on systems theory in explaining how life, nature and all complex systems self-organise. There is no master cell, no CEO, no board of management, no planners, no central committee. It is life emerging from the interaction between elements in a system and between those elements and their environment. And so should it be with organising a social movement, was the message. It would have been good to spend the rest of the session on this topic alone, to open it up and explore its innards, but there were plenty of others with their hands raised to ask their own questions.

One of those questioners was a young woman from the Youth Food Movement (YFM), an organisation that has now expanded interstate beyond its Sydney origin. Her’s was a similar question to mine, about how to proceed and about their relationship with commercial entities. Vandana advised that the constituents might be rather young to offer advice to others as their age might reflect a lack of experience. She asked the YFM to be humble. My thought was that she was suggesting caution while being supportive of the YFM’s work in food sovereignty.

Another young woman (yes, it was a female-dominated event, not that there’s any problem there—it’s like they say in organising Open Space events— the people who come are the right people, and that’s irrespective of gender and other characteristics often the focus of the politically-correct mindset) asked whether GMO’s have potential based solely on their science and devoid of the politics of patents, seed ownership and control around them.

This is a frequently-encountered question often coming from those in science and technology or who make use of those approaches and mindsets. It’s a fair question because it breaks down the complexities around GM—ownership, control, agrochemical dependence, farming systems, any potential for GM to adapt crops to the conditions of climate change, the drift of GM materials and so on. The value of doing this is that you can explore the nuances of GM technology and it can lead to the conclusion of many that the scientific potential of GM is separate to its economic, cultural, environmental and cultural impacts.

Being a scientist with an understanding of systems, however, Vandana answered the woman with a simple statement: “The reality is you can’t separate the science form everything else. They are part of the same thing”.

Another participant asked for a short video clip of Vandana voicing support for the March Against Monsanto his organisation was planning. This she did after the meeting.

Too short a time

There, in the Surry Hills Community Centre that sticky summer morning, we had only an hour with Vandana. Far too short for the depth and range of topics on people’s minds.

In afterthought, How good it would have been to organise a follow-up gathering of those there.

Vandana’s visit was made possible through the support of a number of organisations through the Sydney Food Fairness Alliance and was smoothly organised by Catriona McMillan, a veteran of the organics industry in Australia and a fair food advocate. 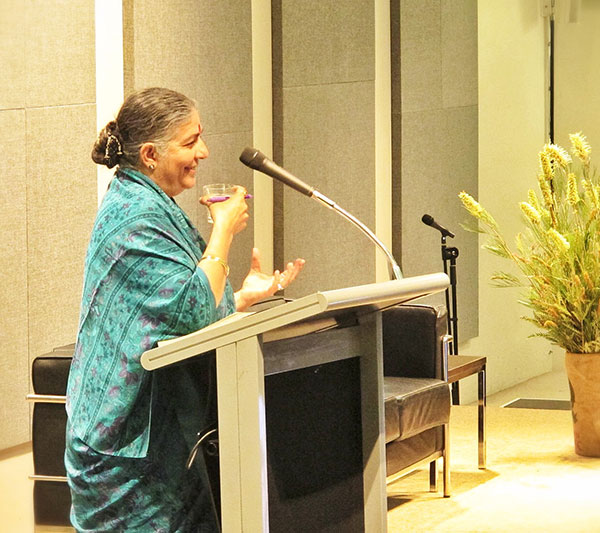 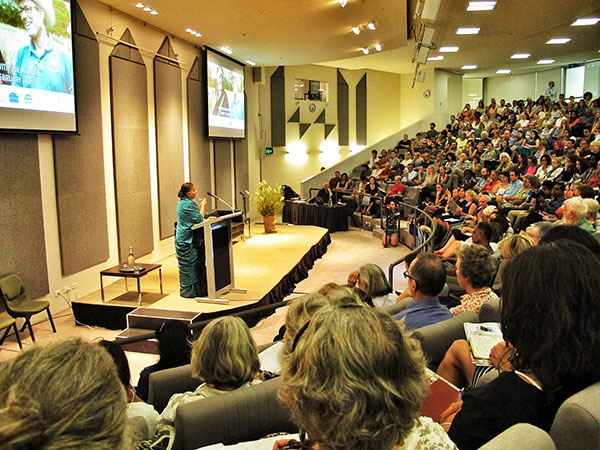 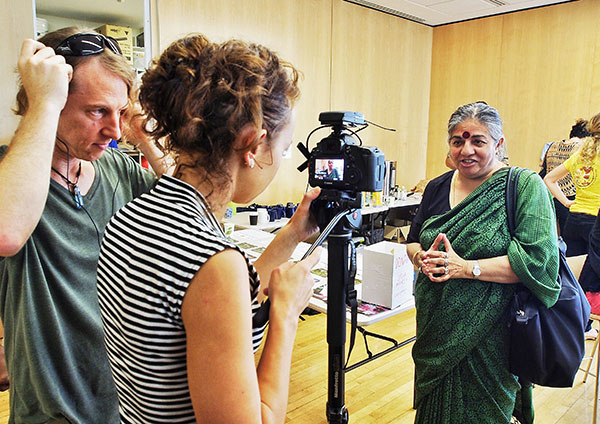 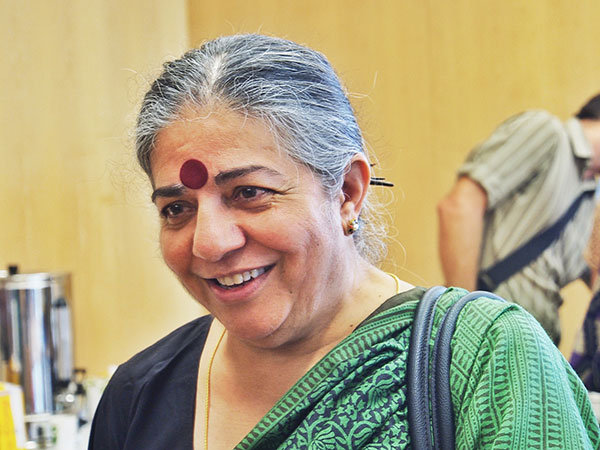