A new apple future for Tasmania – any hope?

Both inspiring and instructive: Vandana Shiva in Sydney 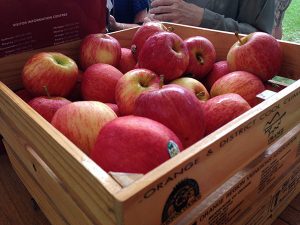 MY ARRIVAL in Tasmania coincided with the collapse of the state’s apple industry. I remember it… farmers in despair as their orchards rapidly fell in value, people expressing their fears about the state’s farming future, lots of apples but nowhere to sell them.

I was living in Hobart then and I had learned that Tasmania is that type of place where the cities are small (around 200,000 in Hobart, 65,000 in the state’s second city, Launceston) and the rural is never far from the urban. Unlike the metropolises of the mainland, the urban/rural separation is a magnitude less on the island state.

[pull_quote align=”right”]” …in 1973 the death knell for the Tasmanian Apple Industry sounded. There was little warning and the export market was stopped in its tracks.”[/pull_quote]Those orderly lines of apple trees encroaching timber farm houses with rusty iron roofs are largely gone now, replaced by the open fields of green you drive past when you go down to the Huon. It’s a landscape changed these past 40 years.

Why I dredge my brain for memories of those times I lived in Tasmania — an island so physically close to the mainland but so mentally distant — is thanks to coming across a story of the history of the apple industry in the Huon on the Tasmanian Geographic website.

Author and Huon resident, Beth Hall, sums up the situation as it developed in the seventies when she writes that ” …in 1973 the death knell for the Tasmanian Apple Industry sounded. There was little warning and the export market was stopped in its tracks.”

She writes as if the collapse of the industry was a surprise, and that’s how I remember it too, a rapid collapse directly attributable to the opening of the European Common Market, an event looked upon rather unfavourably in the Tasmania of the time.

“So many growers were in financial difficulties that the Government was forced to sponsor The Tree Pull Scheme. From 1972 until 1975 many Huon farmers took advantage of this scheme. Over a decade almost seven hundred orchard owners left the industry.

That sums up nicely how something that was taken for granted, the export apple industry in this example, can suddenly crash. We again saw something of the kind at the end of the nineties with the dotcom crash, however that industry came back stronger than ever. Perhaps apples in the Huon will too, as Beth mentions attempts to create a Tasmanian apple export market in Asia. My gut feeling, though, is that we will never again see hills and valleys covered in the blaze of flowering apple trees as they were when the export industry covered them with its edible forests.

Let’s take the big picture view. If we do that then the lesson we extract from the collapse of the apple export industry to the UK and Europe is that global markets for food products are fickle and can rapidly become the victim of political decisions.

This is something to keep in mind as Australia contemplates an Asian export market for northern Australia produce, the ‘foodbowl of Asia’ model peddled by politicians in distant Canberra.

Asia is not some homogenous entity sitting up there just to our north. It’s a place where economic growth, presently led by China, the communist nation that rapidly embraced capitalism when it suited it, is likely to be challenged in the not-distant future by India’s economic expansion. It’s also a place where there’s the potential for small scale regional conflict — political at this time —  such as between China, Vietnam and Japan over the Spratley islands in the South China Sea and the known unknowns around political instability in nuclear-armed Pakistan and that nation’s relationship to its nuclear-armed neighbour, India.

These might be regional things but they could quickly affect an Australian food export market to Asia. It’s just something to keep in mind to temper the boosterism that accompanies ideas like us becoming the foodbowl of Asia.

[pull_quote align=”right”]Among mainlanders, Tasmania has a ‘green and clean’ farming image and maintaining and improving this can take the island far along the national and international food trail. This is why state governments would do well to support, propagate and protect it.[/pull_quote]For those Tasmanian orchardists producing for the Australian domestic market, it’s the apple varieties themselves that have changed. Beth discusses this where she writes that: “Since the millennium the supermarket requirements of size and colourful display have dictated the apples grown in Tasmania. Pink Lady, Royal Gala and the new variety Jazz, are supermarket favourites.  Another apple called Envy is about to enter this market”.

As farmers on the mainland have found, appearance counts as much as price when it comes to supermarket buying policy. Beth doesn’t mention it, but my guess is that it’s likely that apples not complying with the size, colour and appearance demands of Australia’s supermarket duopoly go to waste or, hopefully, the cider brewers.

Among mainlanders, Tasmania has a ‘green and clean’ farming image and maintaining and improving this can take the island far along the national and international food trail. This is why state governments would do well to support, propagate and protect it.

It is an image easily lost, however, an image easily destroyed by bad political and farmer decisions. Make the wrong decision about agriculture and the bad news will rapidly spread far and wide. Like so much else today, farming is part of the reputation economy and in that economy it is perceptions that count.

A resurgent apple industry would be a good thing in Tasmania, especially if some of the tastier old varieties could be resurrected and cleverly marketed to Australian buyers. To do this would requCamdenville Public Schoolire not only knowledgable farmers but savvy marketing much like we saw when the New Zealanders coopted and cunningly renamed the Chinese gooseberry the ‘kiwi fruit’.

There’s today a growing demand for authenticity in the food we eat, and Tasmania can go far riding this surge. It’s done so with its leatherwood honey, a distinctive, Tasmania-only food that relies on the island’s cool temperate rainforests as forage for its bees and, in those forests, it relies on  only one species. It’s a similar story with King Island dairy products, especially the cheeses. Could it be so with heritage apples marketed for their uniqueness?

Read Beth’s Apples of the Huon at Tasmanian Geographic: