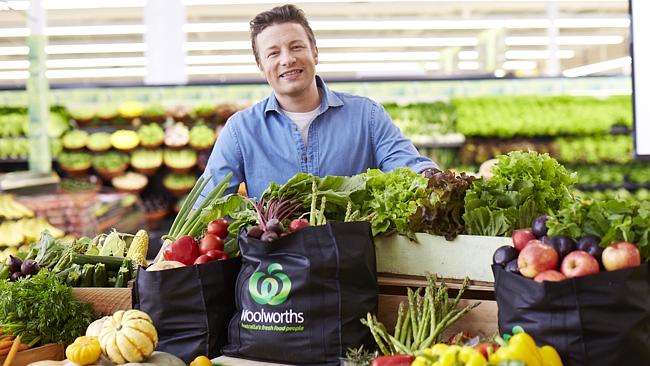 Woolworths has partnered with Jamie Oliver in a campaign to promote fresh fruit and vegetables. The campaign, targeted at kids, gives free stickers to parents for every $20 spent in store. The content of the stickers and the other items that you can purchase as part of this campaign (like a sticker album and miniature greenhouse for growing seeds) promote healthy and sustainable food. They target kids directly and make healthy food interactive and fun.

This is complemented by Woolworths plugging Oliver’s recipes which are simple and healthy. In turn, they display their home brand goods as suggestions for ingredients in the recipes. Woolworths is funding this campaign by a voluntary levy on top the mandatary marketing fee for suppliers of 40 cents per box. Ausveg estimates that this represents on average 30–40 per cent of a grower’s profit margin. What are the impacts of this on Fair Food? Two Food Sovereignty Alliance Contributors give their opinions here.

Here’s two takes on the story…

Story by Russ Grayson, a founding member of AFSA and blogger at pacific-edge.info

What started out as a marketing opportunity for Woolworths and Jamie Oliver has quickly turned into a dent in the celebrity chef and author’s reputation.

Disillusion within #fairfood networks as well among the wider public interested in our food system lurks behind the hostile reaction to Oliver’s ambassadorship of Woolworths.

Oliver rose on a reputation of doing good things around encouraging the use of fresh, nutritional food. He did good work in improving school food. He offered recipes and promoted the use of fresh vegetables. Doing this gained him a lot of public support. Now, in teaming up with Woolworths to ostensibly promote healthy eating, Oliver has walked into the whole controversy that punctuates the relationship of Australia’s supermarket duopoly — which controls over 75  percent or so of the grocery market and largely controls what is offered to Australians as food. It therefore controls indirectly the farmers and food processors that supply it.

It is the ‘voluntary’ contribution scheme of a 40 cents per crate of vegetables tax imposed on Australia’s already financially struggling growers that they, the interested public and the vegetable industry finds so irksome.

“That’s on top of the 2.5 – 5 percent fee growers are already required to pay Woolworths for them to market and promote their produce”, said William Churchill, public affairs manager for the industry organisation, Ausveg, in a media release that gained widespread coverage and that was critical of the Oliver-Woolworths partnership.

Unhappiness at the Jamie Oliver tax

Commenting on the Woolworths’ Jamie Oliver tax on growers, former Nationals senator, Bill O’Chee, in an article critical of Oliver in the Brisbane Times, continued the public criticism of the partnership:

“That doesn’t sound much, until you think that farmers’ profits average only $1 per crate for a whole season’s work. Considered this way, it stinks more than a truckload of rotten spuds… In the last 12 months, the average vegetable grower has gone from making a small profit to making a loss. In the same 12 months, Mr Oliver’s wealth rose by an estimated £90 million. Now we know how.”

There is still time for Oliver to partially repair some of the damage he has done to his reputation by convincing Woolworths senior management to drop the surcharge and refund that collected to growers. Doing this would also benefit Woolworths who could position themselves as responding to public opinion.

Oliver’s statement about having ‘sympathy’ for growers places him in a sticky position. He has to both honour his contract with the corporation while trying to save his face in public. If Oliver gets the promotional levy cancelled and that already paid refunded, that might just go some way to repairing the disillusion his once-supportive public feel. His doing this would also will be a victory for fair food advocates and growers.

Story by Jennifer Richards, a Fair Food eater who blogs at beyondthetrolley.com, which is about sustainable food, ethical eating and supermarket-free shopping

In #fairfood circles, Jamie Oliver has been getting a lot of bad press lately. I’ve been reading social media comments about how people want to burn his books and calling him some pretty unsavoury things. I think the criticism of him is a bit unfair. Love him or hate him, Jamie Oliver is a great communicator about food. Even if you hate celebrity chefs in general, he has authored enough material about eating, growing and sourcing local, ethical food to put himself firmly in the #fairfood camp.

It’s not Jamie Oliver that is the problem. He’s not anti-supermarket, he’s trying to change the system by using the system itself. He has spoken explicitly about using supermarkets as a mechanism for change in unhealthy diets (as his 2010 TED talk demonstrates). This campaign does what we’ve needed supermarkets to do for years – put the same amount of energy and money into marketing fresh healthy food as they do into processed junk. They might be using mechanisms that I don’t think are great – like pester power for instance – but they are applying it in the right place.

Here it the most important thing about this campaign… it is the beginning of change. Someone who has been eating only processed and packaged food is unlikely to suddenly start attending farmers’ markets, but someone who has engaged with fresh food and cooking over a period of a few years just might.

But then you start to follow the money. Woolies is still doing what it is renowned for – squeezing its suppliers. ‘Voluntary’ can be a pretty sneaky word when there is a uneven power relationship at play. Can a levy really be considered voluntary if you are scared that declining to pay it will result in the loss of a contract that might ruin your business? Woolies is a massive, billion-dollar business with a not insignificant marketing budget. It seems only fair that it foot the bill for this campaign. And where is the breakdown of where the levy is being spent and the impact measuring of it’s effectiveness? Surely all stakeholders need that information.

Woolies is up to its same old tricks, but I don’t think it’s worth throwing the baby out with the bath water. This campaign might actually do some good. The fact that a supermarket with a large degree of control over how we eat in this country is pushing people towards fresh food is promising. But squeezing the money for it out of suppliers diminishes it to the point where it seems a lot like greenwashing.

Are you a fair food grower and eater? We want to know what you think about the campaign? Please share – respectfully – in the comments.