In Sydney, a new food enterprise

Then I remember. It’s Tuesday, and I’m used to getting my fruit and veges on Wednesday evening. But that was Food Connect Sydney, and now it’s no more.

He asks if I want my food boxes delivered this way in future, and as Ooooby has closed the Randwick Food Connect City Cousin, where subscribers collected their weekly box of Sydney region produce and groceries, I say yes.

I thank the man and carry the boxes inside. Now, the unboxing.

Unboxing is a ritual enjoyed by technophiles. It’s a candidate for one of those new words in the English language and it describes the process — and joy — that technophiles derive when unpacking a new mobile phone, tablet or, less commonly in these days of the mobile internet, laptop. Unboxing is something of a ritual. People make and post online videos of their own unboxings.

Unboxing is also a ritual enjoyed by those other than technophiles. People like those who subscribe to community supported agriculture schemes, for instance, schemes like the late Food Connect Sydney and, now, Ooooby.

When I operated the Food Connect Sydney, Randwick City Cousin (a City Cousin was the weekly collection point from which subscribers collected their food boxes; doing this could be something of a minor social event), I would watch people come in, select then open their food box to see what goodies were there this week. They did this with the anticipation of the technophile unpacking their new mobile phone. If there was something they weren’t fond of they would exchange it for something else in the swap box.

Unboxing, I now know, is a ritual that spans the full spectrum of interest from technophile to local organic food eater. 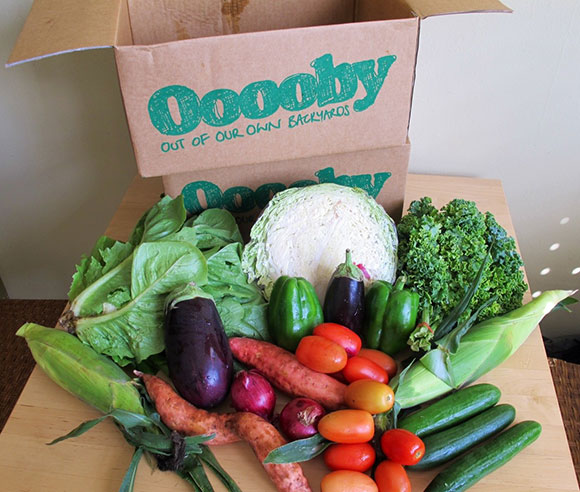 When Ooooby — Out Of Our Own Backyards — took over Food Connect Sydney I experienced a little reticence because here was a food system from Auckland, New Zealand, expanding to Sydney. On one of his visits, I recall the US economist, attorney and local food economy researcher and advocate, Michael Schuman, saying that the businesses that best serve a place are locally owned.

I have to admit to experiencing another point of uncertainty when I read Ooooby’s blurb. That came when I encountered the word ‘natural’. Ooooby defines this as produce that is grown without the application of synthetic agricultural chemicals, however my first reaction was that here was another use of the weasel word ‘natural’ (a weasel word is one that appears sound but that has been hollowed out inside in the same way that a weasel is said to extract the inside of the egg and leave the shell intact — form over substance, in other words).

Natural is a widely used and abused marketer’s term of vague definition and considerable misinformation potential. The produce Ooooby describes as that is more commonly known in Australia as ‘chemical free’ (although that too is vague as the produce could have been treated with botanical chemicals, as is permitted in certified organic production).

Ooooby describes itself as a social business that has a social goal and seeks to make a profit that goes towards that goal. In describing their business model, they mention the Bangladeshi ex-academic and community banker, Mohammad Yunnus. Mohammad was a champion of social business and I recall attending his public lectured here in Sydney, and leaving inspired because he offered a new and better capitalism, a social capitalism.

On its website, Ooooby is non-specific as to what its social goals are, saying only that “All our profits are reinvested into developing local food production”. I have to be fair, though, as they have only now started to operate here in Sydney and may not have identified anything specific to invest in yet, and any operating surplus would likely initially have to go towards establishing the business here before being disbursed in any way.

What’s encouraging though, is Ooooby’s continuation of delivering high returns to the farmers that supply the business. They claim a “static 50 percent” return on sales proceeds to the supplier though that may be less on those occasions they have to make up a shortfall in regionally-sourced foods by topping up from the wholesale market, as the wholesaler takes a cut.

Food Connect Sydney offered, from what I remember, around 40 percent. Thats lots more that the supermarket duopoly — what is sometimes called ‘Colesworth’ because the big two, Coles and Woolworths, control something around 80 percent of the Australian grocery market, making it the most concentrated market of its type in the world. They return, so I understand, only between five and ten percent of checkout sales to farmers.

I’m not one for unboxing rituals, so I unceremonially sliced the tape sealing the box with a kitchen knife. Folding back the lids I was confronted by a large green, curly-leafed thing on one side and a large cos lettuce on the other with half a cabbage between them. On top sat a page listing the box’s contents and offering a recipe for making buttermilk dill cucumber salad and baked kale chips.

The latter I had been told about by Food Connect subscribers seeking new used for their plentiful, in-season supply of kale, (some said they had been kaled-out, there was so much of it) but as someone of severely limited cooking skills I had not dared to try it. Now, thanks to Ooooby, I have a recipe.

The good thing Ooooby does is list the provinence of the vegetables and fruit they supply — the grower and where their farm is located and the organic status (certified organic or ‘chemical-free’, meaning uncertified organic), on the information sheet that comes with every box.

There was more to the box than curly-leaf kale, cabbage and cos lettuce, as I found when I started to unpack it. Hidden and protected below the leafy greens was a range of veges.

Here’s the list, keeping in mind ours was the small box (larger are available): pear tomato x 11 (that’s a good supply for someone like me who eats lots of tomato; I still haven’t finished the tiny cherry tomatoes from our last Food Connect delivery); corn on cob x 2; curly leaf kale, a large parcel x 1; cabbage x 0.5; green capsicum x 2, medium size; sweet potato x 2 of twisted, convoluted shape but tasty-looking; red onion x 2 (good for our salads with the cos lettuce, tomato, Lebanese cucumber and capsicum sprinkled with balsamic vinegar and olive oil with fetta or parmesan cheese or fried haloumi); eggplant x 2, one large, one small; Lebanese cucumber x 3.

The variety and quantity of veges in the small box will be plenty for the two of us and will likely last beyond the week. I haven’t tasted any yet, but by appearance the veges look to be good quality and none were overripe or soft. The leafy greens were firm rather than wilting, the cucumbers look crisp (thus good to dip in chilli sauce as a snack), as does the capsicum.

Unlike Food Connect, you can choose what you want or don’t want in your weekly vege box.

We also ordered a small box of in-season fruit. And, were I into that sort of thing, this would have offered the opportunity for another unboxing ritual. As per the fruit box, my ritual was slicing the tape with the kitchen knife and peering inside.

IMPRESSIONS
The internet and, more specifically, the development of online ordering and payment systems used by Oooby, and Food Connect Sydney before it, enable the development of social enterprise that make possible those shorter food supply-chain links to bring us fresher, certified or uncertified organic foods largely from growers as close to the city as is available.

It’s the experience of regional food system participants that you cannot obtain the range of foods to support a diverse, nutritionally sound diet from some arbitary figure like within 100km of a city. That’s because those foods require different climatic and soil conditions not all of which exist that close to Sydney or most other cities. Bananas, for example, are grown by home and community gardeners in Sydney but are not suited to commercial cultivation in the region, even on western Sydney’s good clay soils. To specify a figure like 100km or any other arbitrary distance is to see food miles as a major factor in sustainable food systems. It’s not, but how the food is grown is. 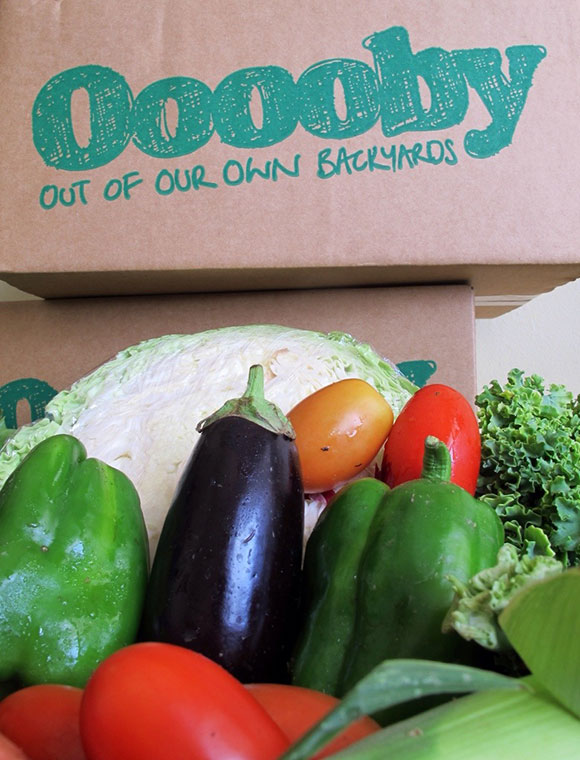 My only suggestions for improving Ooooby’s service are minor, but another person who saw my boxes mentioned this too. They are to find a way to reuse the cardboard boxes and to avoid using the sticky tape to seal them and that would get in the way (its plastic) were the boxes to be used as mulch.

Having operated a Food Connect Sydney City Cousin and got to know the clients, I believe they are people who would expect Ooooby to implement a practice of delivery box reuse. Some of those clients transferred the content of their food boxes to carry bags, packs or bicycle panniers. If they continue to do that at the City Cousins Ooooby has retained, then the City Cousins are left to dispose of the used boxes.

Perhaps, when Ooooby has exhausted its current supply of boxes, it could obtain a new supply from the company that supplied Food Connect. Then they would have delivery boxes that close without the use of sealing tape and that are collapsable for collection and reuse.

So, my impression, judging from this, Ooooby’s first box? It looks good and if Ooooby can keep up the quality and quantity, and source as much as they can from the wider Sydney region, then I think they will retain the confidence of their subscribers (the wider Sydney region I define as around five hours delivery drive from Sydney, depending on the particular food, and based on Food Connect experience).

Here’s hoping that Ooooby plays an increasing role in developing regional food economies and supporting our farmers by delivering tasty, good, fresh foods to its city eaters and sending that 50 percent back to the farmer.

View the Storehouse version of this story: https://www.storehouse.co/stories/v4ff-ooooby-a-new-food-enterprise-for-sydney 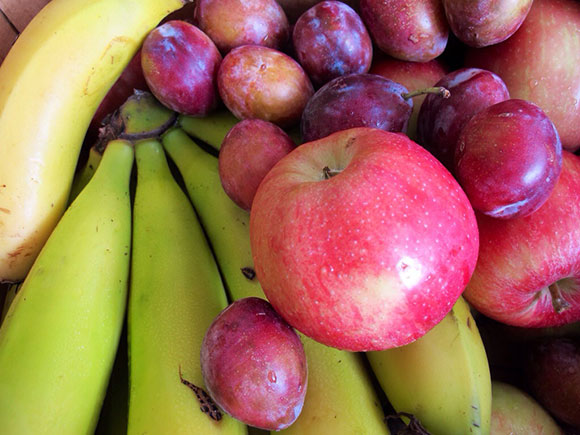