A new approach to agriculture in Australia is needed

LET’s meet at Carriageworks on Saturday morning, Amory said. So we did.

Amory Starr is from the US and is author of the book Underground Restaurant — local food, artisan economics, creative political culture (the title refers to restaurants inhabiting the social underground, that is, not the terrestial subsurface — Amory calls it ‘the decommodification of dining’). For her, the farmers’ market is a ritual and a commitment and her having coffees ready, in the basket of her wheeled wicker shopping contraption ready for our arrival, earned her points.

Amory, a young woman with long, flowing black hair that cascades well below her shoulders, dresses in a style that someone like me, who knows nothing of such things and who therefore probably shouldn’t even comment, would call ‘earthy chic’ (apologies to Amory). As a graduate student she started teaching a course called ‘the political economy of food’ in 1995, long before all this got popular. In 2012 she published an influential article on ‘local food as a social movement’.

Much conversation ensued as we sat around the table in the weak, early Autumn sunshine. It was later that we took a walk around the market with its fresh vege and fruit stalls, artisan cheeses, sellers of mushrooms both familiar and strange, bakers with their breads (Sonoma bakery sells tasty rolls that look like they’ve been extruded from some kind of device, then baked — you must pardon my culinary ignorance, this process probably does have a proper name but I don’t know it) as well as sellers of sauces plain and spicy and numerous other tasty and inviting foods.

Walking along the aisles of the market, peering at foods familiar and unusual, Amory would take us by the sleeve to introduce us to their makers. I soon learned that she knows a substantial number of those stallholders. Amory says that the local food movement, evident as many of the producers and their products here at the market, “sees food as community instead of commodity”.

Fiona bought a truffle cream sauce and that night cooked it with mushrooms and onions — which she bought from one of the fungi stalls — with organic linguini egg pasta, the cream and pasta being made by the Pasta Emilia people. Never had that before and it was… well, it was really good.

So was the morning, just like the pasta it was really good in the company of those food advocates working to make our food system smarter, a little more tasty and a lot fairer. 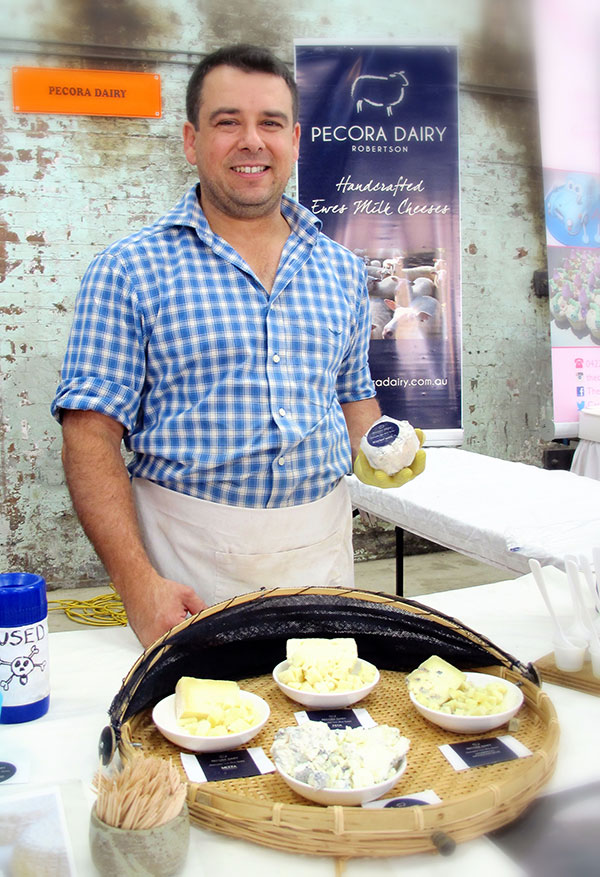 Michael McNamara, co-proprietor of Pecora Dairy along with his wife, Cressida McNamara, is a regular at Eveleigh Farmers Market, where he sells his artisan cheeses.