Local Laws submission to defend the right to common resources 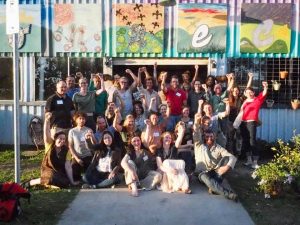 From 20 to 22 October 2019, small-scale farmers and allies converged from across Australia to meet on the traditional lands of the Jagera and Turrbal peoples, paying our respect to elders past, present, and emerging. We held our annual Food Sovereignty Convergence in Australia’s pioneering Food Connect Shed, a vibrant hub of food system activists and workers supporting stronger connections between farmers and eaters, which successfully crowdfunded $2.1 million last year to gain community ownership of this valuable physical resource.

At this year’s Convergence we deepened our resolve and grew our capacity to defend our right to democratically participate in food and agriculture systems, while enjoying time together to build greater solidarity in the food sovereignty movement amongst farmers, farm and food system workers, chefs, academics, and other activists with a focus on the particular needs of youth, women, and LGBTQI+ people.

We commenced the Convergence with a palaver with some of the farmer-authors of the Australian Food Sovereignty Alliance’s (AFSA) most recent book Farming Democracy: Radically transforming the food system from the ground up, discussing the many ways we are working to farm, to grow more growers, and to ensure radical abundance for all in our small-scale degrowth models.

At this year’s AGM, AFSA established the Farming on Other Peoples’ Land fund (FOOPL) with a generous donation from a member. FOOPL aims to support and encourage new farming ventures on existing farms and underutilized land, and to advocate for easier access to land for those who wish to farm in an ethical and ecological manner, and inform the wider community of the benefits in doing so. In establishing FOOPL, we acknowledge that all non-indigenous farmers are farming on other peoples’ land that was never ceded, and commit to ongoing discussions with our local Traditional Owners on how we can pay the rent and treat the land under our care with grace.

Agroecology is recognized by the United Nations (UN) as the best way to feed the world and to build a global food system that is ‘not only sustainable but helps restore and protect Earth’s life-support systems’. In Australia, regenerative and agroecological farming is rapidly gaining momentum, and we re-affirm our commitment to supporting farmers in practices that drawdown carbon, build healthy soil biomes, and preserve and protect our precious water resources to combat climate change and build and maintain sustainable and viable livelihoods.

Small-scale farmers across Australia are grappling with a myriad of burdensome legislation that can be a barrier to growing more growers. The Queensland farmers present committed to transforming their already solid connections into a more active collectivized approach to work for reform of scale- and production-model-inappropriate regulations. After AFSA’s success in achieving significant reforms of the planning scheme in Victoria in 2018, we look forward to supporting similar reforms where they are needed in Queensland, and subsequently in every state in Australia.

Market gardeners discussed the difficulties they face in accessing untreated non-industrial seed, and committed to working collectively to achieve seed sovereignty, through possible initiatives such as cooperating to save, clean, store, and distribute their own seeds in local seed banks, and working collaboratively with smaller, independent plant breeders in Australia.

Turning our attention to Australia’s dying dairy industry, we discussed the need for farmers to be able to sell safely regulated unpasteurized (raw) milk directly from the farm gate, where they can be price makers instead of price takers. Legalising raw milk would not only throw a life ring to our struggling dairy farmers, it would give eaters the choice many crave to consume un-processed milk and dairy products – a basic right asserted in food sovereignty. It would also bring us into alignment with every other country in the world except Canada and Scotland, the only other nations with a blanket prohibition on sales of raw milk.

AFSA will reach a significant milestone in 2020, which will mark 10 years since a group of activists got together and formed the Alliance and set about creating the Peoples’ Food Plan with hundreds of people at ‘kitchen table conversations’ around Australia. We have a decade of achievements to celebrate with comrades old and new, whom we hope will join us next year once again in Brisbane to continue building a stronger movement for food sovereignty.

All this and more we commit to in our struggle for food sovereignty locally and globally. The members once again democratically elected a vibrant National Committee of farmers, food system workers, educators, and academics to lead the important work ahead of us.