The insect approach to planning

Advocacy and insects… strange fellow-travellers, for sure, but they really are related.

It’s not any old insect I’m referring to, it’s a special insect — the dragonfly. Why this? Because the dragonfly is configured to be highly manoeuvrable… it’s omnidirectional… four independent, wispy wings allow it to move in any direction. They act independently but in concert. In other words, this small flying habitue of the streams and swamps is adaptable. And that’s exactly what we need in making a national fair food advocacy.

I’ve just finished flicking through the growing list of events planned around the country for Fair Food Week, and in doing that, that insect came to mind. 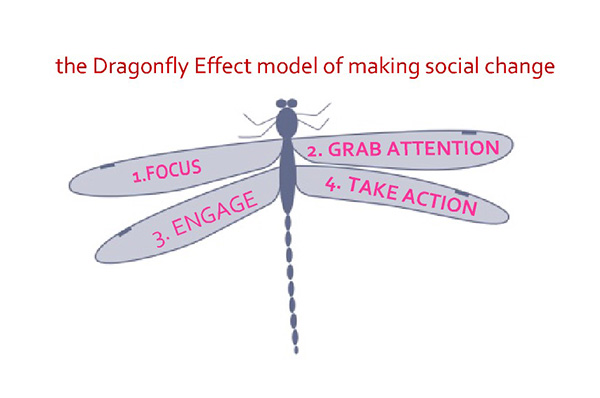 I’m not surprised that it did because the dragonfly is the avatar for the process of creating a social movement. That’s not my idea. It comes from a book called The Dragonfly Effect by Jennifer Aaker and Andy Smith and I’ve adopted it because it conceptualises the main phases of setting up a social movement in a simple and sequential manner. It’s simple, is devoid of convoluted theories and is applicable.

As I read through that list of Fair Food Week events I realised that all four of the phases represented by the insect are happening simultaneously around the country… different locales are at different stages in the continuum… they’re flying on different wings.

First, though, the four phases of the butterfly effect. Each sequential phase corresponds to a wing of the insect… independent but connected for cooperation in manoeuvering. Here they are:

The range of Fair Food Week activities indicates that there already appears to be a loose agreement as to the focus of the fair food movement… it is built around definitions of ‘fair’:
food that is fair to farmers, food processors and eaters
farmer-fair food implies that the farmer receives a price for the food that makes possible a viable livelihood
fairness for food processors — the industry that processes food not destined for immediate consumption… fresh, but for bottling, drying or canning; Australia has had an industry around this but closures in recent times put it at risk, something that can often be put down to corporate owners offshoring their processing and importing processed foods from countries that have lower costs and lower food standards
fairness to the people who buy and eat the food implies that the food must be of good nutritional quality, must be affordable and accessible.

The Australian Food Sovereignty Alliance started attracting attention when it was set up at the end of 2010, when it produced a letter to the federal agriculture minster about including small-to-medium farmers as well as the small food enterprise and community food sectors in its proposed national food plan (an idea trashed by the present mob in government).

We knew we were starting to attract attention when the anticipated dozen or so organisatons we thought would co-sign the letter to the minister suddenly swelled to more than 110.

Later, the development of the Peoples’ Food Plan, intended to reform the anticipated but stillborn National Food Plan and provide an alternative to it, attracted attention as ideas were crowdsourced across the continent.

That leads us to 2013 and the first Fair Food Week. That was a success and we thought we could build on it, thus the Fair Food Week planned for October 2014.

The Australian Food Sovereignty Alliance is engaging with farmers, food buyers, urban growers, universities and other advocates to the extent that is possible with a voluntary organisation.

There’s room for improvement but doing that depends on member’s time and energy being available. That’s why the Alliance publishes a regular enews to subscribers and maintains a website and Facebook.

At the regional scale, food initiatives are engaging with people in the region, whether that’s commercial community-supported-agriculture enterprises (CSA) like CERES Fair Food, Brisbane Food Connect or Sydney’s Ooooby, or whether its social enterprises like Bondi Food Collective or the food co-ops that have populated our cities since the 1970s.

Then there are the community-based initiatives that engage with their memberships and audiences.

The Alliance is already taking action to advocate for fair food systems, supplementing at the national scale what regional organisations like Sydney Food Fairness Alliance are doing at the regional scale.

Other means of taking action are those enterprises I mention above, the small food businesses and social enterprises serving Australian produce where available… the community food systems we find in our towns and cities, the community food gardens, the chefs doing interesting things with Australian foods, the small food distribution services like CSAs, food co-ops, organic buyers groups and the like. They’re taking direct action in creating the things that people want. The Alliance’s focus on advocacy nicely supplements that by working towards a legislative framework that would make it easier for those enterprises and ideas to set root and propagate.

These four wings of the fair food dragonfly are happening at the same time though different locales are at different stages of the Butterfly Effect continuum. Melbourne seems the most advanced in popularising fair food systems and in the range of smaller enterprises and community initiatives engaging with the idea, and far exceeds poor old Sydney in this.

How can we build these different and geographically distributed initiatives into a more cohesive social movement?

I have no answers, just a few rough ideas. I would like to hear your answers and ideas too (add them to the Comments window at the end of this article).

One is that we need local initiatives because they are connected to their constituents in their own, but limited, areas. This is good, but a national fair food movement requires a national presence so we somehow need to develop a connected localism when it comes to local food initiatives like the food co-ops, community gardens and all the other varied citizen initiatives. To do this is to scale-up.

The constraints on developing fair food systems are national, even international in scope and we need something of similar scale to help the organisations that are responsible for imposing those constraints, whether they are deliberate or are the collateral damage of some other initiative of theirs. A national fair food movement needs the capacity to modify their behaviour when it is injurious to good food futures and to the national interest of our continued supply of quality foods and the wellbeing of our people.

Another idea, this one about focusing what we do with our local or regional food systems, whether business, social enterprise or voluntary community initiatives. It’s about coming together. The Australian Food Sovereignty Alliance already brings people together, mostly through its social media, the media with the greatest reach.

Online media is a great enabler of cooperation and it is made even more effective, as is the movement, when it is supplemented by people meeting in the 3D world. A national conference as well as city, state or bioregional conferences or gatherings are a proven means to doing this. There’s nothing quite like personal contact to get to know each other, something that is supplemented by online media.

What such gatherings — I like that word better because ‘conferences’ can bring to mind those boring, sit-on-seats-in-rows events we’ve all been subjected to — need some purpose like the Sydney Food Fairness Alliance had for its Food Summit a few years ago, when the conference took its Declaration On Food the NSW Parliament.

So… a butterfly. A flying creature those independently-controlled wings enable it to hover, wait and watch but that also allow it to dart forward to some new site of opportunity. So, how do we build our own dragonfly of a social movement?