A food-filled evening with the teachers

I don’t know about you, but I’m feeling pretty excited about the future of fair food in Australia. And if responses to community screenings of Fair Food – the documentary – are anything to go by, a lot of people are feeling pretty optimistic!

While the big end of town tries to distract us from disease outbreaks from imported berries and onions with ‘cheap cheap’ campaigns, people are sitting up and taking notice, and choosing more local food daily. Meanwhile, fair food farmers across the country are quietly (and noisily!) going about building a new food system – one that is fair to soil & animals, workers & water, and eaters & air.

The new regulation to taint so-called ‘bath milk’ in Victoria was met by an outcry by many who don’t want the government to restrict their access to whole, unadulterated foods. The raw milk movement isn’t taking things lying down, and they turned out in droves for the #EatBuyGrow rally hosted by the Regrarians on the 19th of February, with demands to ‘get the government out of my kitchen!’

Hero of the fair food movement heretic farmer Joel Salatin of Polyface in Virginia arrived just in time to rouse the crowd with reminders of the many ways in which ‘folks, this ain’t normal’ when it comes to food regulation. Costa joined him and called for a revolution, and I reminded everyone that regulation exists to protect us from things we can’t see, not to interfere with those we can.

Following on from the energetic rally that saw a hundred plus people who care about our food systems and our collective right to determine them, a group of us met with Joel to hear more about America’s Farm to Consumer Legal Defense Fund. The Fund means that when the food police roll up a farmer’s driveway as they did in South Australia to destroy Moo View Dairy’s raw milk provided through a herdshare model, there’s a lawyer at the other end of the phone 24 hours a day/7 days a week to support them in knowing their rights and responsibilities. Watch this space as AFSA works with the Darren Doherty & Lisa Heenan of the Regrarians to investigate establishing a similar fund for Australia.

The exhilarating day that will remain a highlight of my involvement in the fair food movement for years to come culminated with the evening #EatBuyGrow forum at Collingwood Town Hall, attended by over 450 eaters, growers, providores and activists.

Joel was the headline act with another spirited address, this one going into more depth about the importance of heretics to challenge orthodoxy. Joel recounted many of the orthodoxies of our time, such as the idea that nature is somehow broken and needs us to fix her, to make her better than she is. He said, ‘If I really thought nature was broken, I guess I’d figure I probably broke it, and better change something I was doing wrong!’ 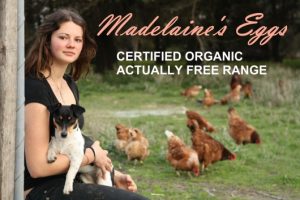 Costa regaled us with examples across Australia of great work being done in the fair food movement, and then we heard from young organic farming pioneer Madeleine of Madeleine’s Eggs, who last year crowdfunded $67,000 for an egg sorting and cleaning machine – feeding her community rather than the banks in the process.

A watershed moment was when Vicki Jones of Mountain View Organic Dairy told us her story leading right up to recent coverage of raw milk in Victoria and her farm’s involvement. She gave a moving account of a farm that transitioned years ago from conventional dairy practices to regenerative, ethical farming with less cows and healthier soils on a profitable farm. Her passion for the animals, the land, and the people she feeds was palpable, and her bravery in standing up to tell her story was rewarded with a thunderous standing ovation.

We finished with a panel of about 10 of us sharing stories, calling for everyone to work together to build the fair food future, and having a few laughs at the hurdles we’ve faced over the years. The room was alive with hope and promise – together we can build this new system and make the old one obsolete!