IT’S only a couple of weeks to Fair Food Week 2014 so I thought I would say something about why and how the Australian Food Sovereignty Alliance (AFSA) started it.

I’ll do that through a 5-point planning process. That’s a way of planning an activity limited in time… it is tactical rather than strategic… it’s a way of thinking through what you want to do, why and how you would do it. It’s an approach we can use in a broad range of applications. Here we go… 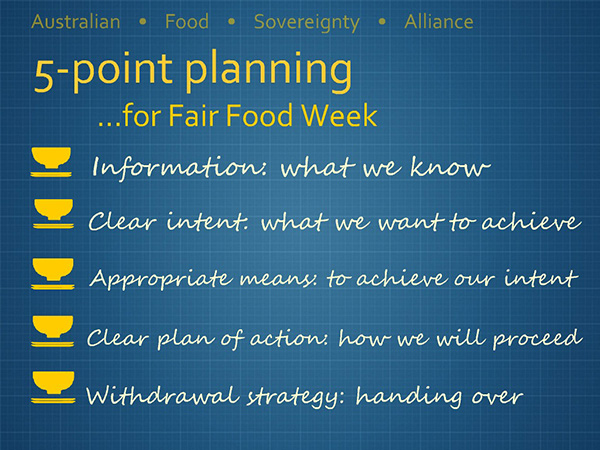 1. INTELLIGENCE — what we know

This is what we know…

For the good part of a decade or so there has been an increase in the number of small food systems and food initiatives that have been appearing in Australia. By food systems, I mean organisations and initiatives designed to give their participants some level of control over the food they buy and feed to family and friends. That’s how they differ from conventional retail.

These structure themselves adopt community-based, social enterprise and small business models of operation. Others are products of the voluntary community sector and these are local and informal and sometimes lack a legal structure such as the incorporated association that is commonly adopted.

This growth has — for the most part — been going on outside the event horizon of government (largely a good thing) and old media (newspapers, radio, TV and the news gathering agencies) to which it remains largely invisible.

Looked at in terms of old economics, the new food systems are supplying the demand that continued patronage of these new food enterprises proves exists. Any market economy worth its weight in authenticity would welcome this new addition, this latest iteration of market economics.

It soon became apparent that fairness was a theme linking the various initiatives in this emerging food system.

The fairness its participants sought was fairness to small-to-medium farmers in the prices they get and in the market opportunities open to them, fairness to food buyers in that they receive good quality and affordable food for their dollar, and fairness to the organisations and individuals doing innovative stuff in food distribution so that they wouldn’t be rolled over by BIG FOOD, the supermarket duopoly and other vested interests in the mainstream food system and their regulatory and governmental fellow travellers.

This led to this loose, diverse collection of producers, processors, distributors and eaters becoming known as the ‘fair food’ movement.

Fair food systems are geographically distributed. They are found in towns and cities across the country. They are hard to see because they are small and local.

Local is good, but physical isolation can lead to a state of mental isolation, of going it alone without the benefit of experience of others of the kind, without an effective means of sharing experience and mutual assistance. That’s where the Alliance comes in saying to these new food enterprises and initiatives “Hey! You’re not alone… there’s others of your kind at large in the world… join us so we can bring all of our kind together for the good of all… join us in Fair Food Week so we can find each other and say… wow! you really are doing something clever when it comes to fair food’.

The food systems and what I describe as ‘food events’ — festivals, fairs, farmers’ markets and the like — are frequently focused on what I call ‘food regionalism’, which some call ‘local food’.

I use the term I mention because, in discussion and at presentations, I like to make the link between local food initiatives and systems and how they can become the focus of creating or reinforcing regional food economies, the economic links around food growing, processing, preparing and selling that sustain an industry built around a geographic region’s climate, soils, agricultural production and culture.

Grow a regional food economy sufficiently and you create the opportunity and employment that keeps money circulating within a region for a longer time before it leaves to buy goods and services not available within the region. In other words, through exchange, the money does more work before it says goodbye and thanks for spending me.

The food systems, initiatives and the informal organisations that make up this diverse but innovative fair food system are not only geographically scattered, they are uncoordinated and often unlinked. Unless we have a networked localism, local stays local and brings little benefit beyond its geographic area.

With no organisation to represent them and advocate for them, small food systems are subject to the fluctuations and vagaries of the market and of government policy.

That is why the AFSA was set up in late 2010 and that is why it created Fair Food Week to confirm that those making this new, fair food system are not alone, that they are part of an economic and social organism with purpose, intent and direction.

In setting up the Alliance, the clear intent was to create a voice for Australia’s new food revolution… for its small food businesses, community food systems like the food co-ops, organic food buying groups and community supported agriculture enterprises; for the small-to-medium scale farmers producing for our domestic market; for urban food growers and home food gardeners and for food processors who take the raw product and make it into something desirable and tasty.

The clear intent for the Alliance is to advocate to government and other decision makers on behalf of this new sector in our food system. It is the Alliance’s intent to feed back a sense of commonality… a sense that individual enterprises are part of an emerging food system providing products and services to the public whose continued patronage shows are in demand.

It is the clear intent of Fair Food Week to celebrate this new fair food sector and in doing so to shout out: ‘Here we are. Something good is happening here. Join us!’.

For the Alliance, the question was this: what would be a way to advocate for this new, emerging food sector other than seeking to sustain its growth through lobbying government and producing submissions to enquiries?

The answer it found was to create a presence for the new food sector by pointing out its arrival. Fair Food Week was born and took its first breath, successfully, in 2013. Now, in October 2014, it takes its first step.

4. A clear plan of action

The plan of action was this: figure out how Fair Food Week would work, identify a date for the event, promote it and encourage fair food organisations around the country to participate. Then hold the event in its multiple locations fair Food Week is a way of networking local food initiatives, small food business and social enterprise — it is networked localism.

The Week is of the self-organising variety — organisations plan their own event or rebadge an already-planned event as a Fair Food Week activity. The Alliance supplies the website on which regional organisations list their event and supply supporting services via social media and graphics for print and online use that the participating organisation can make use of.

In establishing Fair Food Week, the AFSA seeks to offer an antidote to a mainstream food system in which we, the buyers and eaters, are relegated to that crass, largely disempowered role of ‘consumer’… mere food buyers marketed at by a dodgy advertising and marketing industry that hangs like some kind of commensal organism off the food industry.

‘Consumer’ is an economists’ word and economists, marketers and their ilk would say that the role does have power, an economic power based on people’s freedom of choice of what they buy. There is truth in this though our freedom is exercised only within what the supermarkets and mainstream food system decide to produce and offer for sale.

But there’s something that the economists and marketers don’t mention, a capacity built into the base structure of market economics. It is this: our freedom of choice can be weaponised and turned into a tool to discourage or encourage companies in producing certain goods and to reward them, or otherwise, for their corporate behaviour. Let’s not forget that.

And there’s another use for our freedom of choice when it comes to the food we buy. We can use it to support either BIG FOOD with its marketing hangers-on and quasi-monopolisation of Australia’s food supply, or to encourage, through voting with our dollars, those fresh, new enterprises now propagating in the fertile gardens of the fair food system.

Doing that is why we celebrate those small food system innovators during Fair Food Week — the farmers, urban growers, small food processing and distribution businesses, the social enterprises using business models to achieve social goals. Come along and see for yourself — you’ll find the events listed at: fairfoodweek.org.au