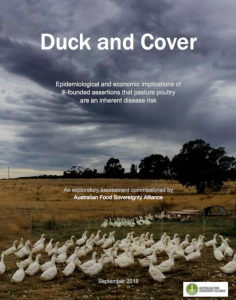 The Australian Food Sovereignty Alliance (AFSA) is celebrating a win for small-scale pastured pig and poultry farmers – and everyone’s access to food grown in ethical and ecologically sound ways – with the Victorian Government’s announcement of the long-awaited reforms to the planning scheme.

The reforms acknowledge the very low risk these systems pose to environment and amenity, and introduce a streamlined permit application process for low density mobile outdoor pig and chicken farms, with no requirement for referrals to other agencies nor a notice and review period.

‘While we still maintain that small-scale pastured pig and poultry farms should not have been required to obtain a permit to farm in the Farming Zone, just as their grazing counterparts are not required to, we have accepted this compromise as a way forward to give local councils and communities confidence that our intentions to raise animals responsibly and respectfully are matched by our farming practices,’ said AFSA President Tammi Jonas.

Up until 2015 small-scale pastured pig and poultry farms were advised by councils across the state that they did not require permits as they were generally considered to be ‘extensive’ or grazing systems. However, a VCAT ruling in 2015 deemed free-range pig farm Happy Valley as ‘intensive’ due to importing the majority of the pigs’ feed.

The decision triggered a process that has taken three years to address what farmers, councils, and the state government all agreed was an unintended consequence of an imprecise definition.

AFSA mobilized its members and partnered with other organisations across the state such as Slow Food Melbourne, Open Food Network, and the Victorian Farmers Markets Association, which led to an unprecedented 270 submissions made to Agriculture Victoria late last year calling for scale-appropriate, risk-based planning provisions.

‘We are delighted at this outcome after years of working with the Victorian Government, and optimistic that small-scale regenerative farmers have a seat at the table now that we have collectivized our voices in an organization that the Government recognizes as the voice of small-scale farmers,’ said AFSA President Tammi Jonas.

‘Whilst the new scheme is not perfect, it blends solid scientific principles with a pragmatic approach for planners to ensure that our sector can continue to expand rapidly while protecting environment and amenity. The Government and its departments are to be congratulated for recognising the emergence of our sector and asking for our help to formulate this new policy,’ said Bruce Burton of Milking Yard Farm.

“Regrarians Ltd applauds the Victoria State Government’s process since it released its draft reforms in September 2017. Working with partner organisations such as AFSA, VFMA along with many of our clients affected by these reforms, we have been encouraged by the professional collaboration of these stakeholders to work with the government such that the regenerative agriculture industry’s interest and best practice have been included. We look forward to continuing the collaboration so that further development of the reforms serves the interests of a regenerative future for Victoria’s agriculture,” said Darren Doherty of Regrarians Ltd.

AFSA hopes this is the first of many amendments to legislation that is hampering the growth of regenerative agriculture across Australia, from scale-inappropriate planning schemes to food safety regulation.

‘We want to see regenerative farming become the new normal, with care for soil, water, animals, farm workers, and eaters at the core of our farming practices, but for this to happen, we need governments to shift their policy focus from supporting industrial agriculture to enabling regenerative farming.’

‘We’re encouraged by Minister for Agriculture Jaala Pulford’s announcement last month of the Artisanal Agriculture program, with $2 million earmarked to support our members in their efforts to grow food in ethical and ecologically-sound ways,’ said Jonas.

The Australian Food Sovereignty Alliance (AFSA) is calling on the NSW Government to secure a future that encourages regenerative farmers by ensuring regulatory burdens on small-scale pastured livestock producers are commensurate with the low risk they pose to their communities.

The Government states that the aim of its proposed planning reforms are to ‘support the development and management of intensive livestock agriculture’ through:

The Government claims that the ‘proposed amendments will illustrate a clear difference between extensive and intensive agriculture land uses, making it easier for industry and applicants.’

Under the new reforms, all pig and poultry farms, regardless of size or production model, will be considered ‘intensive livestock agriculture.’ A farm with 25 sows on pasture will be called ‘intensive’ just like a shed with 2000 sows inside.

While the Government has retained thresholds that enable an exemption from the requirement for development consent – for those farms with less than 1000 birds or 200 pigs or 20 sows – the introduction of a 500m setback from neighbouring dwellings or environmentally sensitive areas that triggers a Development Application is a major barrier for pastured pig and poultry farming on small acreages.

AFSA supports regulation of farming that protects human and animal health and preserves environment and amenity. We call on the NSW Government to amend the proposals to address the following key concerns:

Pastured pig and poultry farms must be unshackled from the negative environmental and social consequences[1] of their industrial counterparts and treated independently, because they simply do not pose a significant risk to environment or amenity.

Penny Kothe, pastured pig and poultry farmer and owner of Caroola Farm in Mulloon, notes that, ‘a 500m buffer means that almost all small-scale pig and poultry farms would require costly council approvals. This could cause the death of truly free-range pig and poultry farmers. It will place limits on our future ability to farm in a more sustainable and ethical way. These reforms will definitely be a deterrent to new farmers, at a time when we desperately need to be encouraging people to enter the industry.’

Cameron Mynott of Australian Pasture Fresh says, ‘it is imperative for the future of sustainable, ethical, regenerative farming, that small-scale farmers be able to run under a common-sense, outcomes-based legislation. From a risk mitigation perspective, applying measures and controls to all farms irrespective of their actual size and operations is both counter-intuitive and counterproductive. It has been proven, globally, that animals raised in a pastured environment, with rotational grazing and mobile infrastructure, create none of the issues or risks that the proposed legislation seeks to mitigate.’

‘Applying a simple to understand head to hectare ratio to further define “intensive” is not only fair and reasonable, but will ensure NSW does not see the devastation to Australian family farms that Victoria is currently experiencing. It’s heartbreaking to speak to other farmers who are having to close their operations down due to legislative burdens.’

State governments must take heed of increased community expectations for ethical and ecologically-sound produce, and support those who farm this way to meet the growing demand. This is especially pertinent at a time when Australia faces a changing climate and dwindling resources. The current draft policies would deter future farmers from entering farming, at a time when Australia has fewer farmers than ever before.

AFSA President Tammi Jonas states, ‘A food sovereign and secure future depends on appropriate planning controls that preserve farm land in perpetuity. Legislation should also protect the rights of all people to access nutritious and culturally-appropriate food produced in ethical and ecologically-sound ways, and their right to democratically determine their own food and agriculture systems.’