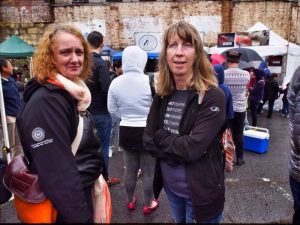 IT WAS RAINING but that didn't stop Catriona Macmillan (left in photo) and Fiona Campbell joining the hundreds, perhaps well in excess of a thousand people at Hobart's Sunday Farm Gate Market, the popular farmers' market in the centre of the city.

You should have known that if you're going to encounter Catriona then that's likely to happen at a food market of some kind. We encountered her buying a couple dozen of the shellfish from Ironstone Oysters who source their product at Pittwater, just over the eastern hills from Hobart. That, surely, counts as local seafood.

"You must come and meet some of the stallholders", insisted Catriona. "You've got to meet the people selling Tasmanian walnuts".

Another thing you should know: when you meet Catriona at a farmers' market you soon get to meet the stallholders. Meeting people engaged in growing, processing and selling food is her normal work, after all, being a food system consultant and a consummate networker.

Soon, thanks to her introductions, we were sampling Ashbolt's elderberry juice and syrup concentrate, chatting to the woman selling breads made with flour from Carrington Mill in Oatlands and talking with the people selling Tasmanian walnuts.

Fiona, who you see with Catriona in the photo, is no stranger to good, regionally produced food. Her experience is as an urban grower and educator in home and community gardens. In Sydney she has been associated with the community supported agriculture scheme, Sydney Food Connect. Walking around food markets, talking to stallholders, making edible discoveries and buying tasty goodies, even in today's light drizzle, is not something alien to her normal behaviour.

"Are you taking photographs for some publication?", the man asked. "I saw you photographing elsewhere in the market".

"For the website of the Australian Food Sovereignty Alliance", I told him. "It's an advocacy organisation that supports regional food markets and food systems and the livelihoods of smaller farmers, food processors and eaters".

Standing in the light drizzle we got to talking. He was a man perhaps in his mid-sixties, bearded, and dressed in the manner you find Hobartians adopt in cooler weather, a kind of rural-outdoor get up that keeps them warm and relatively dry, though being damp is not something that bothers them.

He seemed to approve of what I told him then went on to let me know his thoughts on the global food market.

"Tasmania can produce much of what it eats rather than bringing in food from China and elsewhere", he said.

"And those television cooking shows... they demonstrate complicated-to-cook foods rather than basic foods".

Exactly my thoughts I realised, as he explained his attitudes to me, recalling reading somewhere that the preponderance of television cooking shows and the deluge of cookbooks in bookshops has failed to increase the home cooking of meals and, instead, has become part of the television entertainment industry... cooking as spectator sport.

Here was a man who had thought things through, saw them for what they are and realised that regional food systems can do better. It was one of those chance encounters that let you know that what you are doing in promoting regionally-produced food is the right thing to do.